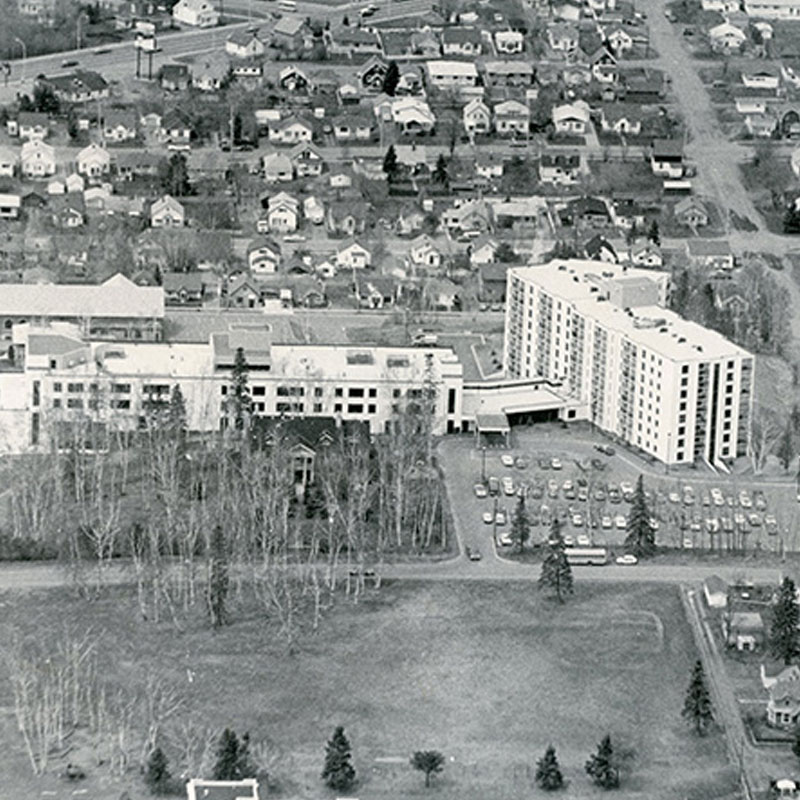 In 1881, the first Sisters of St. Joseph arrived at Prince Arthur’s Landing (Port Arthur). It did not take long for the Sisters to recognize the need for a hospital. When a man who had been injured working on the rail lines was brought to the Sisters’ convent for care, they knew they had to help in whatever way they could. They had no room in their convent other than their chapel, which they converted into a hospital room to care for this gentleman. With fundraising and support from the community, Mother Monica built St. Joseph’s Hospital which opened in 1884.

Mother Monica and the first Sisters would be amazed at the way health care has changed over 125 years. However, they would not be surprised that the Sisters have followed in their footsteps, always working with and for the community in meeting unmet needs.

Since that time there have been 3 other significant campaigns

Since the creation in 1983, St. Joseph’s Foundation of Thunder Bay has raised over $28 million. We are blessed and truly thankful to have the financial support of the many contributors who continue to provide the funds needed at St. Joseph’s Care Group.

With the success of the Campaigns, fundraising activities, donations, and the ongoing contributions received through memorials and estate gifts, St. Joseph’s Foundation is well positioned to face the future.  Current annual fundraising events include Benny Birch’s Birthday Party, St. Joseph’s Golf Classic, and the Grand a Day Draw.  The field of fundraising is extremely competitive, but the Foundation is fortunate to have a loyal donor base, a solid volunteer force, and dedicated and hard-working Board members and staff.

A major capital campaign was undertaken to build the Heritage.  The campaign was called the Manor Project and involved the whole community.  Catholic churches and the community, businesses/corporations, Hospital staff and the Hospital Auxiliary contributed many dollars to the success of this campaign.

Fundraising activities ceased.  Once the Heritage opened, it was felt that expenses for Bethammi would be covered by the revenue from the Georgian Room, the community centre, and nursing home resident co-payments.

Mounting financial pressures demanded the re-establishment of the fundraising office in the fall of 1981.  Chocolate bar sales, bake sales, car raffles, tag days, bingos and the first Benny Birch’s Birthday Party were held to raise money.  These events helped to spread the word about the services and programs offered at the Heritage.  The money raised was used to help with operating expenses (direct care provision) in Bethammi.

By the fall of 1984, the $35,000 monthly mortgage payment for Bethammi could not be met.  The anticipated revenue from the Georgian Room and the community centre to offset the cost of operating the nursing home was never realized.

As a last effort to save the Heritage, an SOS Campaign was launched by the Foundation to pay off the mortgage on Bethammi.  A fundraising consulting firm was hired to conduct a two-month feasibility study.  The study reported that the community would support a major campaign to save the Heritage.  In six months, $3.9M was raised through one-time donations and pledge payments spread over three years.  The Foundation purchased the services of Heritage staff to monitor and collect campaign pledges.

Beginning in 1994, all fundraising money was used to purchase capital equipment for the Heritage, and was no longer used for operating expenses.  Also in 1994, because of the unstable external environment, a decision was made to direct all fundraising dollars to the Foundation for safekeeping.

As far back as 1881, the Sisters of St. Joseph were the first fund raisers for the Hospital.  The archives tell a tale of door-to-door appeals for food, blankets and money.  Also, for over 100 years, the Auxiliary to St. Joseph’s Hospital have been dedicated and faithful fund raisers, providing equipment for patient care.

In 1991, the Community Relations Department was established. The mandate was to provide media and communication services, and raise funds to purchase capital equipment.  This was necessary due to government cutbacks.  Donations from patient solicitation letters aided in the Equipment Fund and Healing Gardens campaigns.

In 1997, the Foundation launched the Campaign for St. Joseph’s, a major capital campaign to raise funds for the redevelopment of St. Joseph’s Hospital from an acute care facility to a complex chronic care and rehabilitation facility.  With great financial support from the Sisters of St. Joseph, the Hogarth Westmount Hospital Foundation, corporations, businesses and individuals, the campaign goal of $3 million was reached in May 1999. During the months of the Campaign for St. Joseph’s, fundraising activities for the Heritage were held and remained successful.

In October 1999, the Care Group Board passed a motion to direct all donations to St. Joseph’s Foundation of Thunder Bay.

In September 2000, an Endowment Fund was established to ensure that financial resources are available to support the long-term charitable works of the Sisters of St. Joseph of Sault Ste. Marie, within the District of Thunder Bay including St. Joseph’s Care Group.  Gifts to the Fund are invested, and will remain in the Fund in perpetuity.  Only the income on these investments will be used for the general purposes of St. Joseph’s Care Group.  The Fund is made up of gifts from: estates, stock, insurance, planned gifts, and donations.

The Foundation officially launched the $2.5M Campaign for Hogarth Riverview Manor under the slogan Celebrate Life – Help Make the New Hogarth a Home, at the first annual St. Joseph’s Golf Classic in September 2002.

The Foundation focused its efforts on building the campaign around a ‘furnish a room’ type of project to provide a comfortable, safe home for the residents with an emphasis on helping them to be as independent as possible in a home-like atmosphere.

With generous support from the Sisters of St. Joseph, corporations, businesses and individuals, the campaign goal of $2.5M was reached in May 2004.

In September 2011, the Foundation launched the “Campaign for St. Joseph’s Hospice Palliative Care” to raise funds needed to renovate all of the outdated client rooms in the unit, located at St. Joseph’s Hospital.  The vision was to improve the furnishings and environment to provide the client and family more comfort during end of life care.  After only 5 months and with tremendous support from the community, the Campaign surpassed the $500,000 goal and raised $794,000.